Developer Focus – A Galaxy in Motion 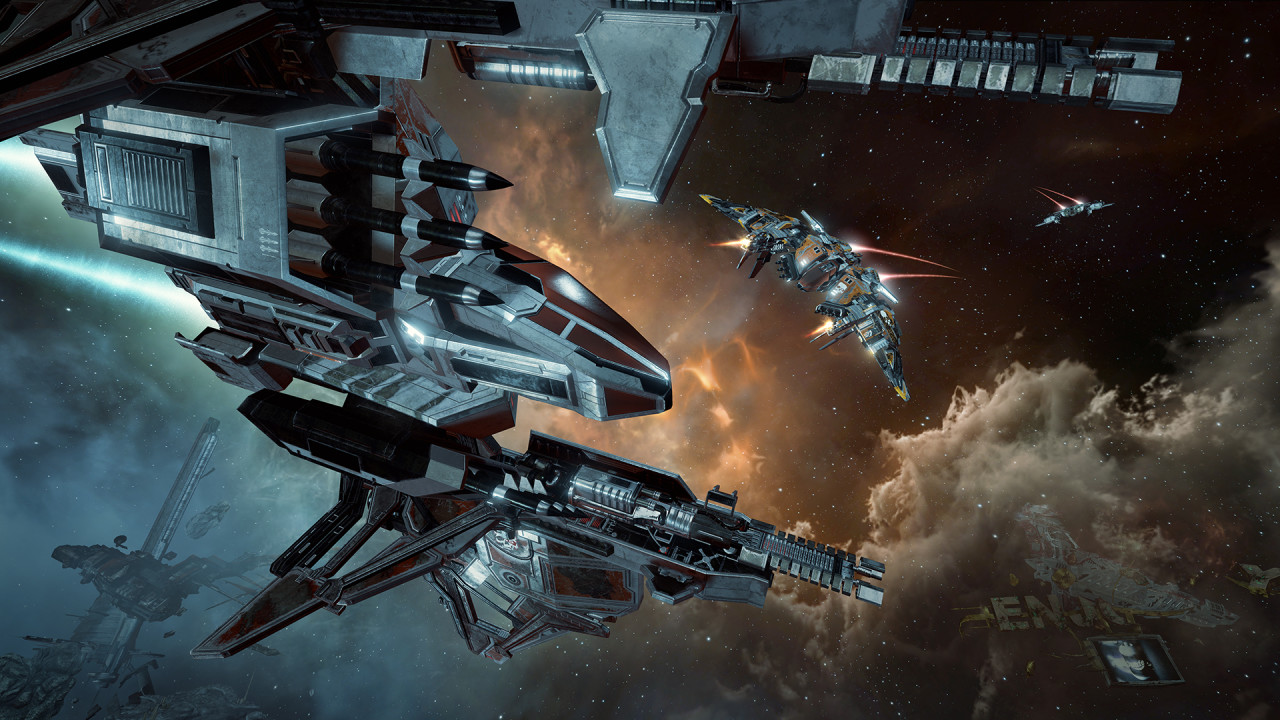 Virtual Reality gaming has been around in one form or another for decades, always firing the public’s imagination but never quite managing to find a foothold in the market. However, the ‘reality’ we find ourselves inhabiting today is somewhat different. The immense power of present day consoles and desktop computers, coupled with the relative affordability of the hardware required for the task, has resulted at last in viable home VR platforms, with EVE: Valkyrie at the cutting edge of the VR gaming scene.

We caught up with Associate Producer on EVE: Valkyrie, John Nejady - aka CCP Bosun - to get his thoughts on virtual reality and to find out how the team at CCP Newcastle approached the challenge of creating an epic space dogfighting VR game to life that is both thrilling and comfortable for the players.

The 1960s saw the first appearance of head-mounted and head-tracked VR displays, but it was in the early '90s that VR gaming became accessible to the general public in the form of Virtuality Group’s arcade machines. While giving us a tantalising glimpse at the possibilities for VR gaming, the huge cost of the units and relative crudeness of the games on offer meant that the project simply wasn’t viable. Similarly, a VR headset designed for Sega’s home consoles struggled to bring VR gaming to the masses with the hardware never actually making it to market.

A failure, then? We shouldn’t be too quick to dismiss these early attempts, says Nejady.

“I think the work of early pioneers in any field should be treated with a large degree of appreciation by anyone who later benefits from it. I consider those pioneering works in the same way that I consider early attempts at human flight. A bicycle with wings might look kooky now, but today we enjoy flying as an everyday occurrence thanks to lessons learned back then. Dismissing those efforts would be a disservice to our fellow pioneers.”

Are You Sitting Comfortably? 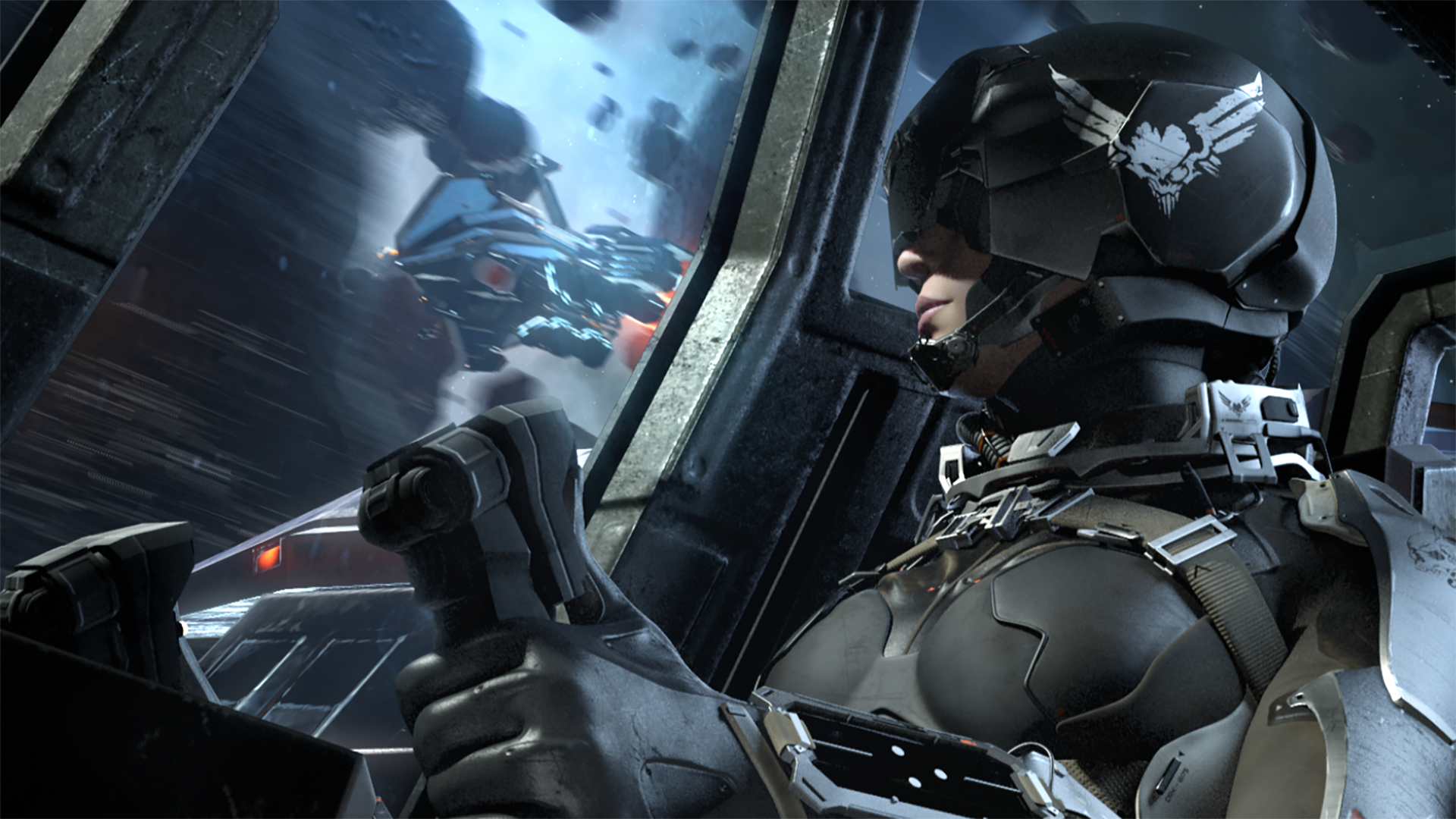 Despite the usefulness of these pioneering VR attempts in informing a roadmap for future forays into the medium, one problem from the early days persisted… the potential for motion sickness. Improved optics, high refresh rates and greater visual fidelity are now possible thanks to the current technology available and these mitigate any discomfort experienced to a significant degree. Even so, moving around a virtual 3D environment while stationary in the real world can still lead to problems, unless the developers get clever about it.

But do you create the game first then work on the comfort, or the other way around? In the case of Valkyrie, it’s the latter.

“Comfort was, and continues to always be, a consideration.” Says Nejady. “People who play our game are giving us very privileged and intimate access to themselves. We want to make sure they continue to feel great at all times.”

What does that mean in practical terms? Did the Valkyrie team have to develop the game in-headset, as it were? It would seem so. “Testing and playtesting has always been carried out in VR at CCP Newcastle," says Nejady, "which has given us all a great bedrock of understanding on which to build our knowledge and experience regarding how different things feel in VR.”

It’s the unexpected that poses the greatest problem, though. According to Nejady, “visual bugs can arise during development that make you feel like you’re in the trippy, fractal, laser-show ending of 2001: A Space Odyssey. Bugs like that have to be squashed, quick and hard!”

Many first-person games in VR rely on a neat but unrealistic system of rapidly teleporting the player from their present location to a designated target, thereby reducing the intervening rush of scenery and the head-spinning effects of virtual travel. This is not necessary or, indeed, desirable in EVE: Valkyrie, as pilots want to experience constant motion and a maelstrom of sights and sounds in order to reproduce the thrill of what it must be like to pilot a starfighter.

However, as Nejady points out, these two situations are somewhat different: “The methods you choose to move people in VR worlds right now come down more to the physical reality of the user than anything else. Games that use the teleport method are usually standing experiences, and creating first-person standing movement that feels natural has proven difficult for many developers, for all kinds of reasons.”

The fundamental difference with Valkyrie lies in your cockpit environment and the physical way you play.

“In Valkyrie, we are fortunate in the sense that we have a seated game, played by people sat down.” explains Nejady. “Vehicular, seated movement, with legs advanced and hands in front, is something we humans are totally naturalised to thanks to chairs being used in cars, buses, planes and so on, and we are fortunate that people are comfortable with this situation in Valkyrie. 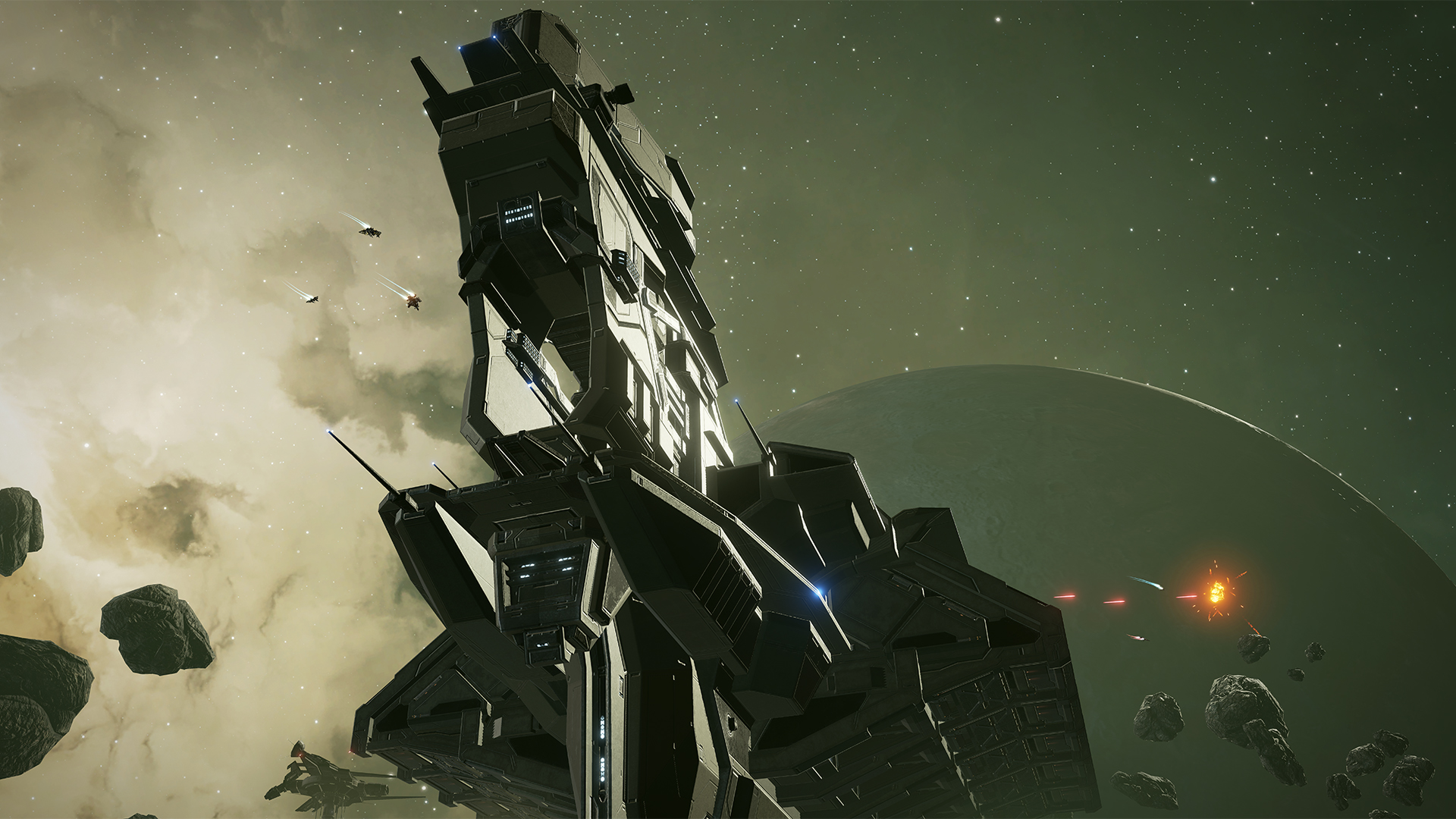 It’s not just the pilot’s physical situation that affects the player experience. Careful consideration needs to be paid to what’s going on outside the cockpit, both in terms of scenery and scale.

It became apparent during Valkyrie’s development that as long as the user feels a justifiable connection between their physical reality and their perceived reality (in VR), scale can play around with quite a bit in VR. Having scenery scaled in a way that feels right to the player is crucial.

Nejady offers a useful analogy: “If I’m playing a VR game as an average sized human sitting in a golf cart, but I’m able to drive the length of ten football fields in a couple of seconds, the inner workings of my brain are going to start asking questions about what just happened. When your brain starts to do that, unease can creep in and, as mentioned before, that’s the last thing we want to happen.”

It might seem slightly counter-intuitive, but in Valkyrie, EVE: Online ships or assets are scaled up one and a half times to give an even greater sense of speed. The player is in a rocket powered spaceship, so this makes sense to them and they don’t have any kind of ‘golf cart’ identity crisis. 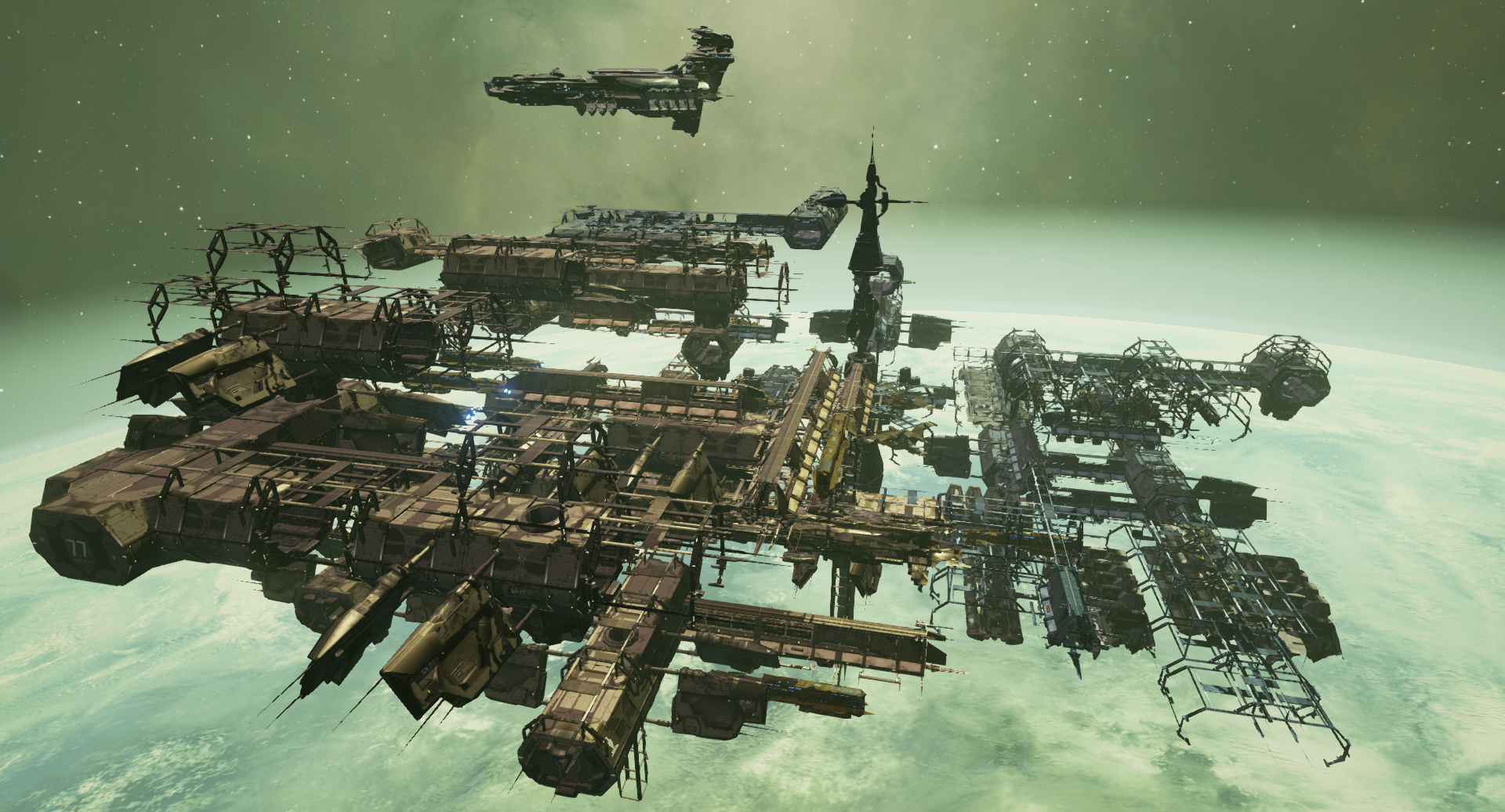 EVE: Valkyrie’s early maps provided a balance of cover and open space, but as each new map has appeared the designers’ ambition has grown, as has the complexity of the game’s environments.

Nejady walks us through the process of evolution: “In the years before launch and since, we’ve been constantly learning. Based on our own internal playtests, player feedback and data, we’ve gradually honed in on elements that will give people the best possible time with new maps. Early maps were more open, then gradually we added more environmental factors such as asteroid belts, shipyard frames, mining barges and jumpgates. These allow pilots of all skill levels to use the environment to break missile locks, manoeuvre, boost and break to lose people they have on their tail.”

Indeed, as players will no doubt attest, with each new map comes a unique experience offering awesome new flying opportunities. Whether it’s jumping through the length of the Gateway, doing laps of its circular walkways to evade incoming fire, or hiding out in asteroid craters to lose missiles… it’s all good. 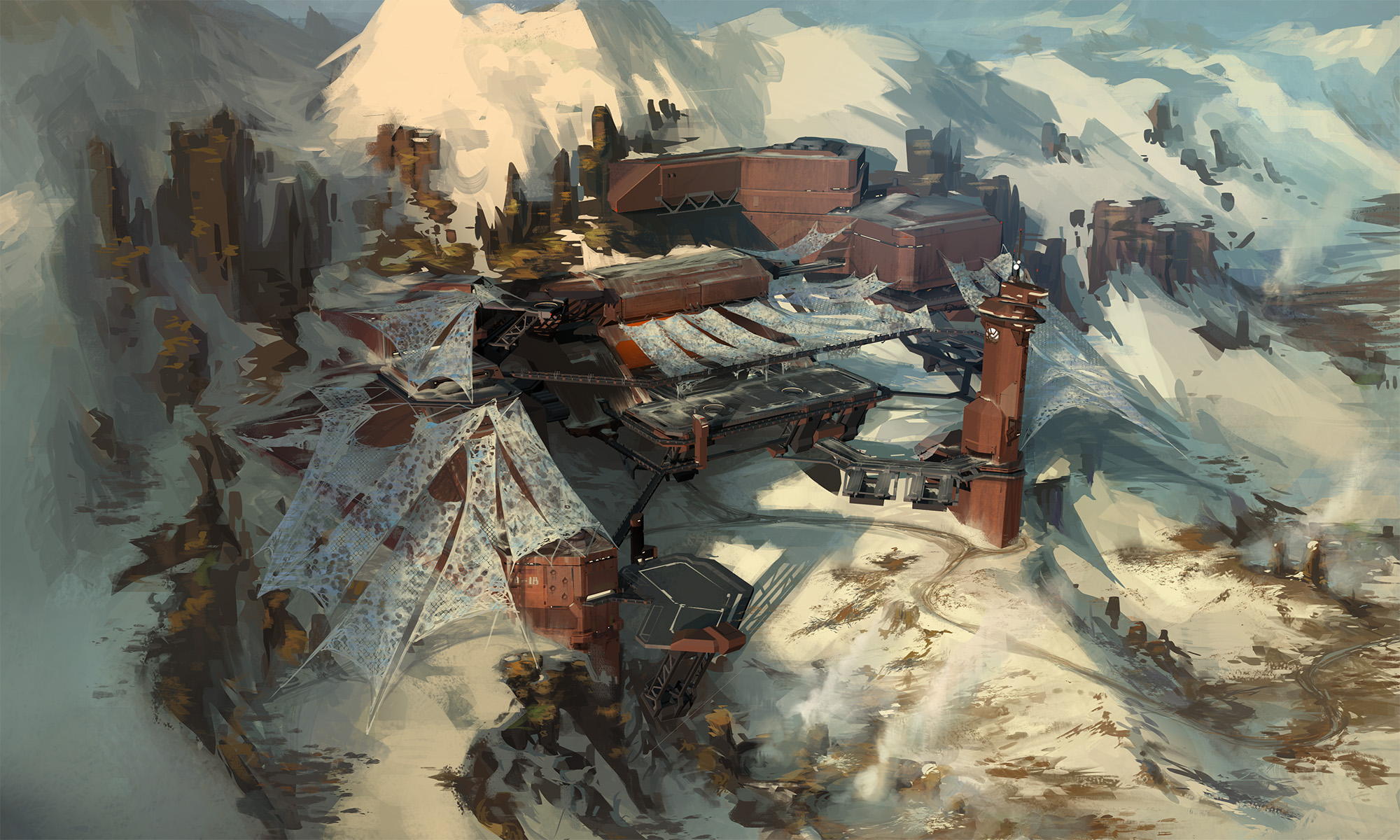 Which brings us up to date and the release of Valkyrie’s latest and most strikingly different map, Solitude. For the first time, Valkyrie pilots can take the battle planetside and this departure from the cold void of space brings with it unique design challenges. As Nejady explains, Solitude simply couldn’t have existed a year ago.

“Solitude wouldn’t have been possible without the knowledge we got from previous maps. It’s taken a year of experimentation and research into VR combat, in a variety of spaces, and six months of playtesting and development to get to where we are now.”

The presence of a visible horizon was a particularly important consideration. “Research on our tutorials showed us that the presence of an implied horizon line can make some players think about their physical orientation”, Nejady points out. “On Solitude, we have blurred the horizon line to inhibit this effect somewhat. This allows players to exploit the awesome possibilities of surface combat, whilst ensuring they continue to feel as comfortable as possible.”

It’s been quite a journey both for the team and the players and one that looks set to continue to surprise us at each new turn. A huge thanks to John for giving us an insight into how EVE: Valkyrie set the standard for VR gaming.

If you want to find out how the CCP Newcastle team approaches ship building in EVE: Valkyrie, check out our previous dev focus.