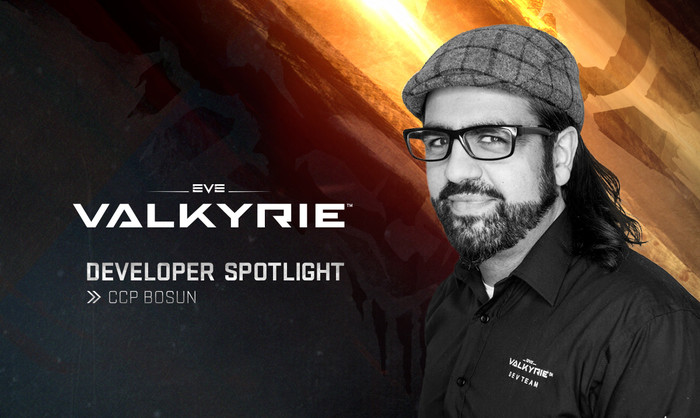 John Nejady AKA CCP Bosun or ‘Nej’ has been with the EVE: Valkyrie team since 2014. As the game’s Associate Producer, we sat down with him to talk about some of the dev team’s focus.

What do you do at CCP?

I help the team to know what needs to be done in order for us to make Valkyrie even more awesome, and I make sure they have no obstacles or hindrances that might stop this from happening. I’m proud to be part of a team that is able to ensure things are successfully delivered on time. Also, I’ve been able to help the team deliver the world’s first (and second) ever VR livestreamed tournament, the most-played VR demo at E3 2015, and our build for the Oculus Rift launch-day.

What sort of things are you working on?

On our Trello board, which has been available to the public since launch, our community have been able to see an overview of what we are working on now, and things we’d like their ideas on for the future. A large focus for me is the card that mentions us being a launch title on PlayStation VR. Delivering our PlayStation VR content and features for launch has been the main focus of the team for some time now.

We have been working with Sony for years now - developing and demoing EVE: Valkyrie with them since 2014, when PlayStation VR was still known as Project Morpheus. This close relationship has proven invaluable to the continued improvement of our game, and our growth as a world leader in VR content. Working with Sony has given us a great opportunity to show our game to more people, and gave Sony the chance to show the best-available content on their incredible headsets. Getting our game onto the PlayStation platform is huge for us, and these early collaborations strengthened us immeasurably.

What are some of the big challenges to launching on PSVR?

Localisation is a massive project for us! In the PlayStation VR version of EVE: Valkyrie we will support the English, French, Italian, German and Spanish languages.

When I first saw French subtitles in our game, I got a shiver down my spine. It dawned on me what we had done. In adding this language support, we have gone from making the game understandable and accessible to 365 million native English speakers, to nearly 1 billion people - native speakers of English, French, Italian, German and Spanish. I now see this linguistic door-opening as possibly one of our biggest achievements.

When did the team start working on localisation?

Localisation work was kick-started as part of our preparations for EVE: Valkyrie being part of Sony’s PlayStation VR demo program across the entirety of North America, as we needed to provide a version that supported Canadian French. If you are in North America and would like to book yourself in to try out PlayStation VR and join the legions of people being blown away by EVE: Valkyrie, you can enter your ZIP code and book yourself up here.

Who is working on this primarily?

CCP Thoughtscape and CCP Bad Horse were instrumental in getting this in game. Whereas originally lines of dialogue would just be audio put in game where they would play and sound good, we had to write a system that cut up every single line and displayed the appropriate text at the appropriate time, and in the appropriate language.

On top of that, every piece of UI and text in game, some of which were just images, had to be re-written with a system that referenced the appropriate text, in the appropriate language, in the appropriate font, without messing up how it was displayed. You can imagine how much fun that was. CCP Shadowcat and her team in Reykjavik have been instrumental in translating these bucketloads of text in-game.

What else are you working on?

Cross-Platform play! This is a massive deal both for CCP and the community. Having the ability to have EVE: Valkyrie players on PC VR platforms and PSVR playing against each other, for me, is an absolute horn-sounding, bell-ringing, tell-your-grandkids-one-day awesome moment for the future of gaming. This is well underway, but as with all things development, there are things we need to do right in order to be allowed to do it, and for it to work.

We’ve been designing and implementing our trophy pack for PS4, so you can rack up the golds and see how well you compare with your buddies! More info on this soon, I’m sure there are a lot of people chomping at the bit to hear the full list!

What are some of the challenges to working on PSVR?

Probably platform compliance. Ok, this doesn’t sound very exciting, and on the surface it isn’t. It is however essential to be able to be part of any console ecosystem, and one of the reasons that the big platforms are so big and so popular, is that they guarantee to users that the experience will be consistent between games.

I recently heard this part of development aptly referred to: ‘You’ve got to eat your gamedev vegetables’. Working on games, yeah, everybody wants to make the gun go boom, the spaceship go whoosh, and make the bells and whistles all fire, but in order for anybody to ever see that, you’ve got to put some grunt-work in.

I was working in games for maybe 5 years before joining CCP, with Linden Lab and Ubisoft. I started out in Customer Service and moved through anti-fraud, QA, design and some production and leading small projects.

Immediately before joining CCP however, I was actually unemployed for around 7 months. That was the longest I’ve ever been out of work and I really feel for others who are looking for work. It can be pretty demoralising, especially if you’re a busy person like me. I think CCP taking me on from being in that predicament has probably made me more loyal and diligent. I appreciate having this job and its opportunities massively.

How did you get a job with CCP? Can you talk about the process?

I was recommended by two friends who were at CCP in the QA team who I’d worked with before at Ubisoft.

I had a quick Skype call with HR to make sure I was a real person, then had an interview in the Newcastle studio. That was a full day being interviewed by probably half the team in 1 hour blocks. They wanted to make sure they got the person with the right personal fit as well as professional capability and competence. I was also taken for lunch on the Newcastle quayside. I think I had a hotdog. I got the call offering me the job and did a few laps of the house with a massive smile, then called my girlfriend.

We have total creative control of our game. I mean it. Sometimes you see the tagline of ‘creative control’ or some alternative term used to attract people, then when you get there all you’re doing is what you’re told to do by another ‘lead’ studio a thousand miles away. We 40 people in Newcastle have absolute control over our game. For anybody in the creative industries, that means a lot. You can search for years for that and never find it.

I like to surf, sail, run (I’m doing the Great North Run this year), play games, read, travel and make robots. I also like to party with my friends and colleagues, especially now that it’s warm. Occasionally I make music, but not with any real conviction recently, more to scratch the itch.

I grew up playing Descent, X-Wing vs TIE Fighter (so you can imagine how much I love working on Valkyrie), and the Command & Conquer games.

Also Rocket League - so much fun, unapologetically crazy, I love it, and it’s my lunch-break game of choice. If you pitched rocket-powered-car-football to any big company you’d probably be laughed at, so bravo to them for making it work!

I can do a really good collared dove call. My Gran taught me how to do it out the back door of her house. For years I tried with no joy while she did it, then one day it just clicked. They come and investigate when I do it – one actually swooped for my head one time.

CCP Cral. We both started out in QA and sat and played together all the time for work as testers. He’s a programmer now and I’m a producer so that doesn’t happen much anymore. He’s also very funny, and good at the game. Maybe nostalgic wingmen choices aren’t the most effective score-wise, but I reckon we’d have a laugh!

And finally, where can we find you on social?

You can discuss this blog on the EVE: Valkyrie forums