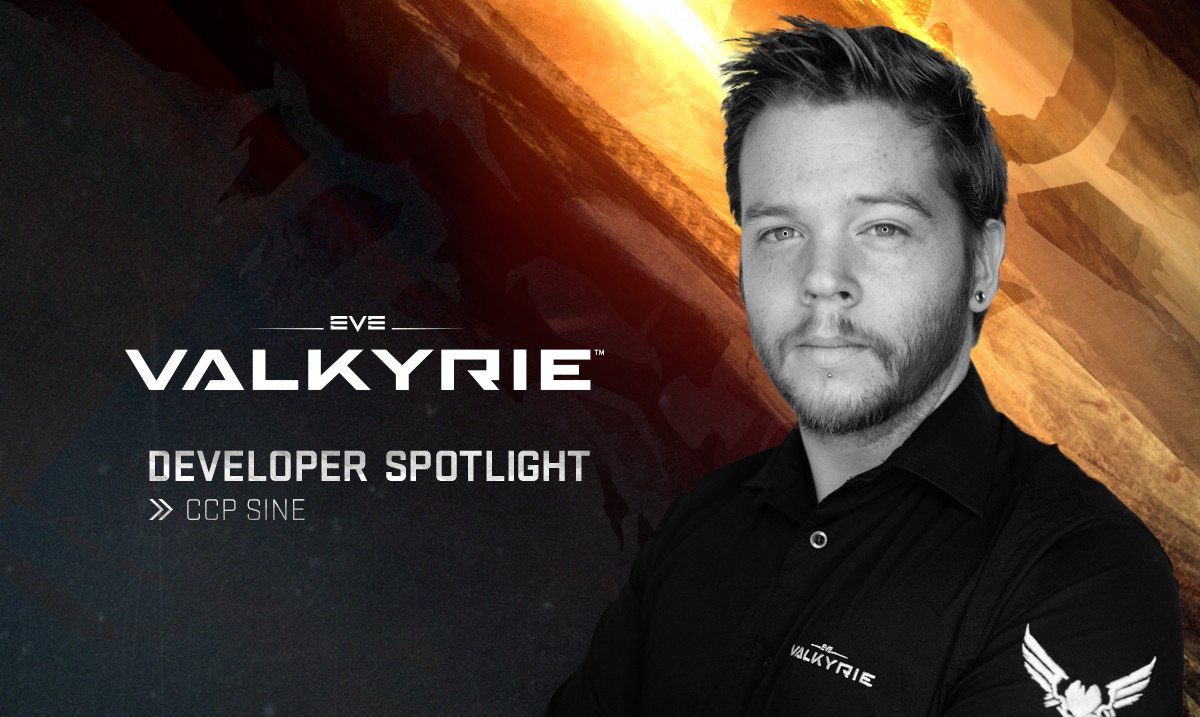 Our developer spotlight series continues with one of CCP Newcastle's resident Sound Designers, CCP Sine. We sat down with Sine to chat about his work on the iconic sound of Valkyrie.

What is your official job title with CCP?

My job title at CCP is Sound Designer. I first joined to help assist in asset creation but now my tasks spread from all areas from mixing to localisation to music implementation.

What does the job actually entail?

I spend most of my time creating and mixing audio assets for all areas of the game, then beyond that we constantly look to see what we can improve to make the game as immersive as possible. I also take care of controller force feedback to make sure that vibrations and audio complement each other and add to the experience.

On top of that I also help out with editing and implementing the game’s music. All this is done while maintaining an arsenal of Nerf guns to defend myself!

What kind of kit do you use to make Valkyries sound?

We like to use FM synths and a range of effects to generate a lot of the sci-fi elements like fluxing energy, weapons and shield sfx. Then we layer as many real recordings as we can to add that gritty element.

With Valkyrie being a VR game it is important to add as much variation as we can within the cockpit so it can feel as close to the word ‘natural’ as it can. I also have a bent up old car bonnet out the back of the studio that I like to absolutely wreck for the impact sfx!

What is your favourite sound effect in the game?

My favourite sounds in the game so far have to be the Launch sequences for each ship class and the cracking glass you hear when your ship’s taking a beating!

Any teasers as to upcoming sound developments in Valkyrie?

We’re planning to fully expand on the sounds that are in the game already and adding the finer details… more cockpit deterioration, more sounds linked to how you’re moving your ship, things like that. For instance if you’ve been pretty beaten up and you’re flying away to escape and you’re pulling a few G’s you will be able to hear glass creaking and maybe the chassis/engine straining.

We’ve already seen people grit their teeth while playing the game so our target is to get many more to do the same!

Before CCP I worked at Ubisoft for a while and at TT Fusion working on Lego games before that. Also helping out on short film projects around Manchester.

The family vibe the studio has! Smaller teams are the best because you get to know everyone, work with everyone and it makes life easier when you are all closely working towards the same goal.

What are some roles the audio team have that we may not know about?

Besides making bangs and pew pews, the audio team needs to not only make sure the game sounds good but can also run well on any platform. Optimization is a key part to our development cycle, especially when working with new VR technologies.

We are constantly working to improve the mix and translation of sounds to VR to make the experience as raw, informative and immersive as possible.

And now the personal stuff - if there was one thing you’d be doing outside of your current job, what would it be?

Probably another audio-related discipline – it’s what I live for! Maybe TV/film post production. I’d like to be an artist in another life, but my drawing skills are practically limited to stick men.

Either hanging out in Newcastle and checking out what it has to offer or at home geeking out over YouTube tutorial vids! The need to learn more never ends so most downtime goes to R&D, checking out new synths and Virtual instruments, seeing what other sound designers are up to in the VR world.

The Silent Hill games (especially the first instalment) were what made me want to work in game audio so they will always be special to me. I loved the fact that the audio alone created such a tense/unnerving reaction with players and that was enough for me to pursue a career in games.

I’m more of an FPS gamer and titles like the Battlefield series, Call of Duty and OverWatch have incredible soundtracks and soundscapes. I’m a sucker for ear candy and these titles fit the bill for me. Other games I spend time on are Elder Scrolls, X-COM (even the originals!) DOOM and pretty much any WWII game.

My guilty pleasure is 60s tunes! My hair has been almost every colour there is but has now been blue for close to 7 years.

CCP JBot because hes good at smashing enemies while they’re preoccupied (or shooting me!). My short life span gets increased when he’s around!

For more on CCP Sine, check out this awesome presentation on Building the World of Valkyrie from EVE Fanfest-