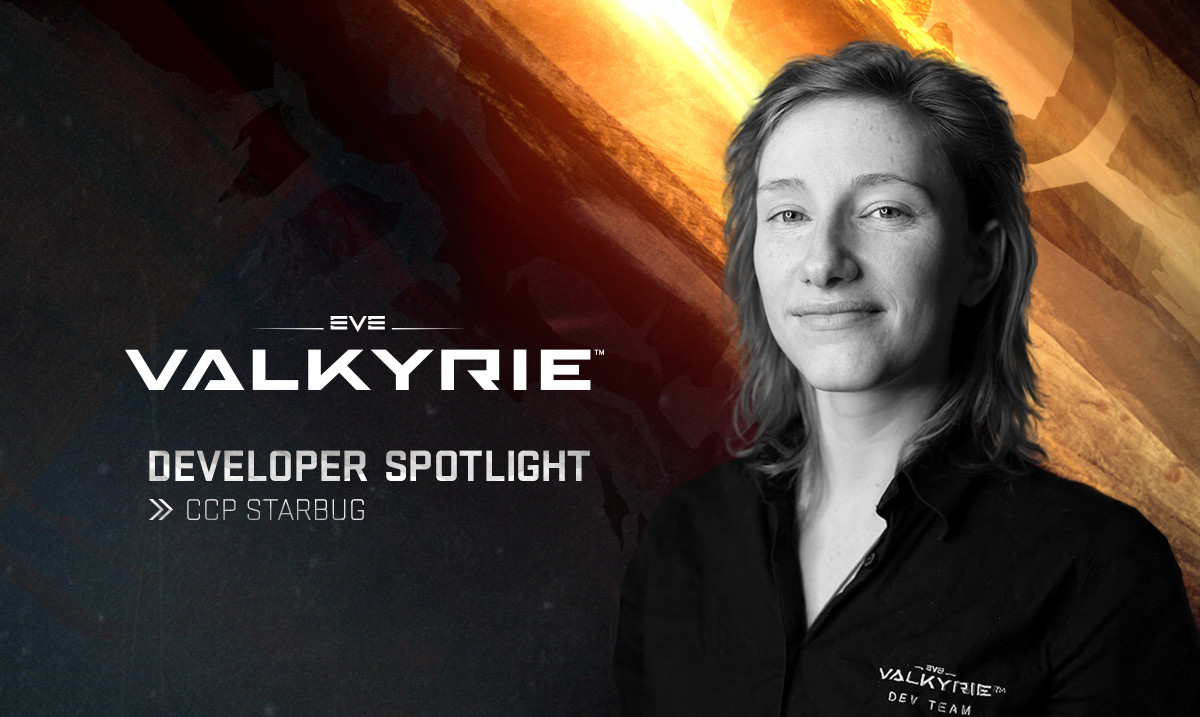 From Fanfest Panels to events like EVE_NT, CCP Starbug is a well known face of the Valkyrie Development team. An active forum poster and gaming enthusiast, we sat down with Starbug to chat about how she became a part of EVE: Valkyrie.

What is your official job title with CCP?

What does the job entail?

I get the chance to do a variety of things, but I spend most of my time creating design briefs for various features and collaborating with the team to implement them. I also do some level design and game mode set up, which is my main interest.

Before CCP I was working at Eutechnyx creating race tracks – some fictional and some real – for several NASCAR titles and Auto Club Revolution. I also worked on racing games as a hobby, so it’s been a big change to make the leap into space and virtual reality. My start in the industry was developing iPhone games and creating prototype games for Sony to prove (and disprove) a range of concepts.

How did you get a job with CCP? Can you talk about the process?

Sadly I’d been made redundant from my previous job. While there were some opportunities to continue working in the racing genre, the opening at CCP was more exciting and challenging than anything else I could find. When I received the job offer here two years ago I excitedly rang my parents to tell them the good news and forgot to actually reply and accept the offer for several days. Thankfully CCP reminded me!

There is a strong sense of team collaboration here--particularly in decision making--which really appeals to me, especially as there’s a huge breadth of experience in our studio. The small team size accentuates this. Anyone can get involved in ideas if they want to.

Learning to ride a motorcycle! It’s been on hold over winter and while we work hard to finish Valkyrie, but I’ve passed my theory and module 1, and I’m hoping to get stuck into module 2 for my full license as soon as possible. Beyond that I’m endlessly battling my natural laziness to improve my running and I’ll be doing the Great North Run this year.

My desk is adorned in Metal Gear Solid figurines. I’m a huge fan of MGS1, 2, and 3. I had probably memorised most of the dialogue in MGS1 as I replayed the game continuously as a teenager, but it’s gradually receded to make way for more useful information over the past 10 years or so.

More lately I’ve sunk an embarrassing amount of time into Diablo 3 and I’ve been dipping in and out of The Witness and Fallout 4. I recently finished Grim Fandango for the first time. Having never really played this type of game before, an observer described it as though watching a bee repeatedly try and fail to exit an open window.

I fell over outside the office last week and landed on my bicycle and my keys. Thankfully no-one saw.

CCP Illumin. Then I can stop wasting my time trying and failing to chase him down and kill him. In Valkyrie, that is.

Where can we find you on social?