Joint Strike Update: all the details 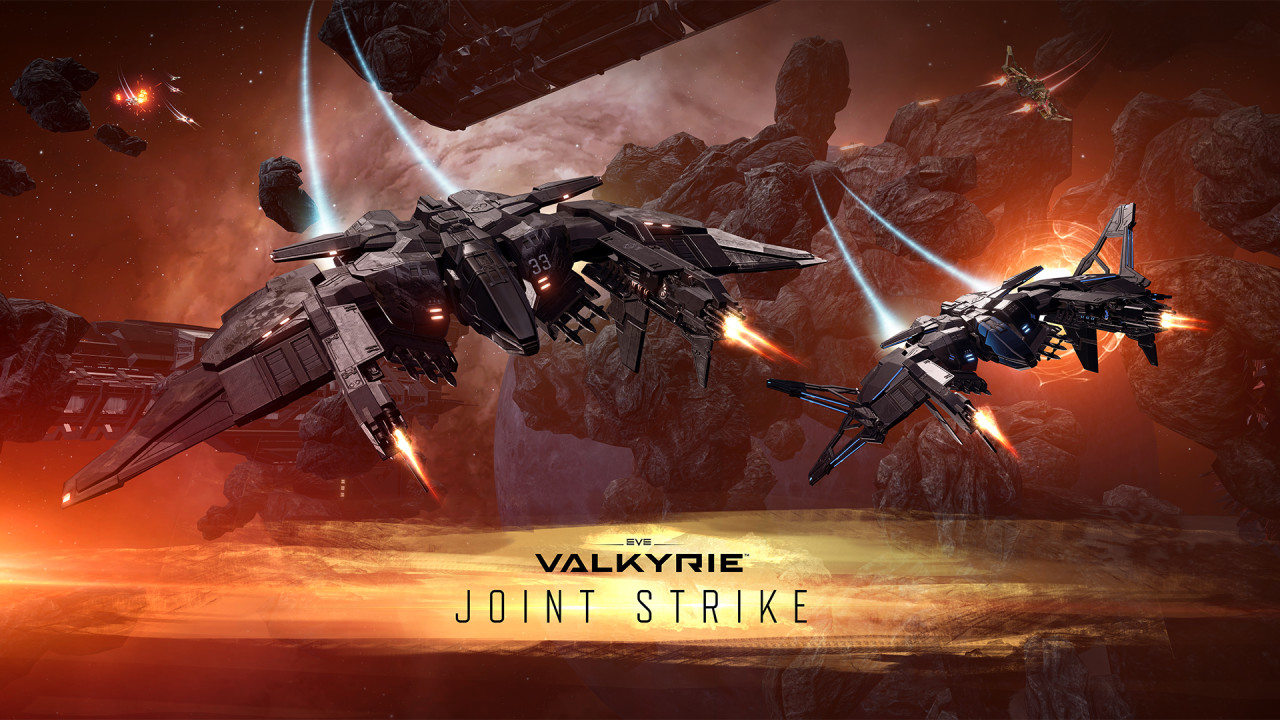 Forget December and all that guy-in-a-red-suit nonsense. For EVE: Valkyrie pilots, at least, the Holiday celebrations start on October 7, when pilots can expect their biggest and meatiest free update yet: it’s called ’Joint Strike’. And remember, this is just days before a huge inﬂux of new rookie pilots ﬂy in on October 13 — thanks to the release of EVE: Valkyrie on PlayStation VR.

The full list of new content, features and tweaks in Joint Strike is mind-bogglingly long so we thought we’d take a bit of time here to spotlight some of the key, need-to-know elements for you.

Much has been made in the past of the ﬁerce rivalry between PC and console gamers and the fact that they can be pretty territorial when it comes to defending their gaming hardware of choice. That’s all going to change on October 13 when Valkyrie pilots get to enjoy cross-platform play in VR gaming. At that time both Oculus Rift and PSVR owners will be able to literally ﬂy together, and die together in harmony through the medium of EVE: Valkyrie.

Surely this will be a momentous coming together of former enemies the likes of which the world has rarely seen. Then again, perhaps the two sides will simply use the game as a way to reignite the old rivalries and blow one another to smithereens. Either way, we think you’ll agree, everyone’s a winner.

Alongside the marriage of PC and PSVR gamers, a new Co-Op game mode is to be introduced. Via the Combat HUB players will be able to invite friends to join their squad or match-make a squad in order to play against a rival AI team with similar abilities.

Anyone participating in a Co-Op match will receive the same XP and currency awards. It should be noted, however that while crossplay is available in battle and during team play, the creation of individual squads is limited to a single hardware platform.

The ability to share important information rapidly with your teammates would be a pretty cool thing, and that’s precisely what you’ll be able to do with the new Com Alerts feature, which is also part of the Joint Strike update.

All you have to do to send a Com Alert is press down on the D-pad to bring up the Com Alert wheel, select your message and release the D-pad to instantly send it. Messages include attack, defend, group and you can even rally players around an objective, signal that help is on its way or give thanks to a helpful buddy. The messages issued are voiced according to the pilot’s gender and as well as an audio alert, the message also appears in text form on the right of every player’s cockpit.

EVE: Valkyrie’s single-player Recall Mode is getting a shot in the arm as there are not one, but two whole new missions to get stuck into. Now, while the game is multi-player focused, we're also going to great lengths to create a believable and fascinating universe for you to inhabit and key to this is the backstory revealed through the Recall missions.

The new missions will put the spotlight on two previously under-explored characters. The ﬁrst subject is the game’s antagonist Fatal and his plans to dominate the galaxy. The action takes place on the Shipyard map but not the one you experience in multi-player mode. This chapter takes place earlier, at a time when the Shipyard was controlled by the Caldari ﬂeet, and examines how they came to lose it.

More intriguing is the second character, and this is none other than the Quartermaster. This mysterious chap is neutral, having no speciﬁed alliances, and the more we learn about him, the more we realise that he is much, much more than simply a master ship builder.

A Daily Dose of Action

Everyone likes to be rewarded for their hard work and soon, you’ll be able to scoop up a whole load of extra Visk, XP and salvage by tackling the all-new Daily Challenges.

Each player can hold up to three challenge cards at any one time and a new challenge will be issued every single day. The exact nature of the challenges will remain a mystery until they become available but they will include tasks like killing ﬁve ﬁghters, making the ﬁrst kill and securing three objectives. Just make sure you log on every day to see what’s available because if you miss a day, that challenge will be unavailable to you.

Given the massive inﬂux of PSVR gamers about to enter the EVE: Valkyrie universe it makes sense that the Joint Strike update should contain something for rookie pilots, and indeed there is. First there’s a new game guide that pilots can access containing a whole range of text summaries and VR assets. Via this guide newcomers can familiarize themselves with all manner of Valkyrie play modes, game mechanics and features.

Then there’s the new Test Arena. It’s basically a big playground stuffed with enemy and friendly AI ships that have been instructed not to return ﬁre so you can practice your fancy ﬂying moves without being blasted out of the sky.

Even better is the fact that the carrier shields have been disabled enabling you to make like your favorite space heroes and practice the trench run from the Carrier Assault mode.

Good grief you pilots are a demanding lot, but fear not, there’s plenty more on offer in Joint Strike. For the style conscious, there are new Paint Jobs and Decals so you can show your true colors in the heat of battle.

Your ears will be pleased to hear a bunch of new audio content and FX most notably the thunderous crack and boom you are rewarded with when you take down an enemy. On the progression side, successful pilots can swell their wallets thanks to increased amounts of Visk.

Every completed battle earns you 8000 Visk and victory will score you a cool two grand on top of that. The menu systems throughout have been revamped and those with a real love of facts and ﬁgures will doubtless take great delight in the extensively rebalanced gameplay with countless tweaks having been made to velocity, ﬁre rates, armor damage, control conﬁgurations… you name it, it’s probably been tweaked.

You can discover all the new content on offer when you get hold of the Joint Strike update on October 7.