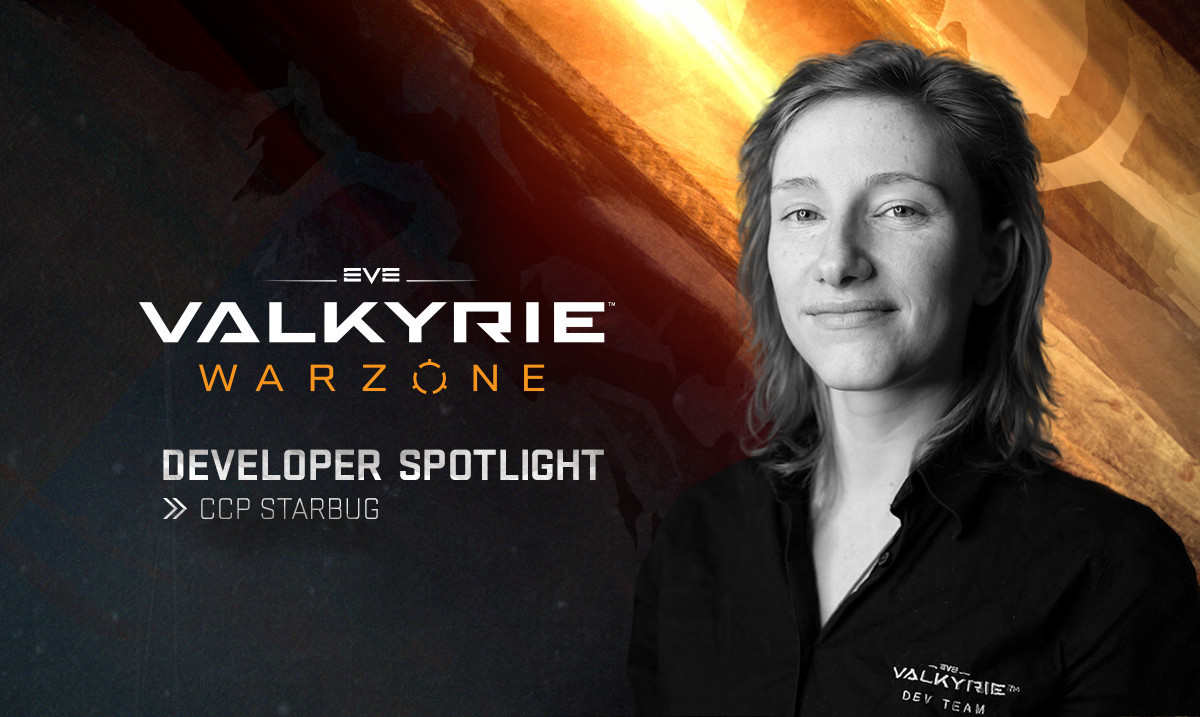 EVE: Valkyrie is all about taking you as pilots to places you’ve never been before, whether it’s a unique virtual reality experience or the freshly-announced, cross-reality Warzone update. You’re all used to finding your way to the surface at the deep end by now! A big part of keeping it fresh and exciting is the introduction of new maps, and EVE: Valkyrie – Warzone delivers big in that respect.

As a level design team, we’ve been working hard on the Warzone update to bring you not one, but two brand new maps. Both of these new locations support all of our game modes. There are new Echoes to discover in Scout Mode, new rewards to be earned by collecting our brand-new Relics, as well as opportunities to set high scores in Survival Mode. In addition to that, all current PvP modes will also be supported; TDM, Control, Carrier Assault and the newly added Extraction Mode.

Launching into the new and unknown is exciting, especially as we are building on a rich foundation of EVE lore and history. Since we’re releasing the two new maps as a pair, we wanted to take this opportunity to introduce you to more facets of their backstory, including new factions and ships that you may not have seen before. We also wanted these new maps to offer a stark contrast to one another, so let’s find out a bit more about them! 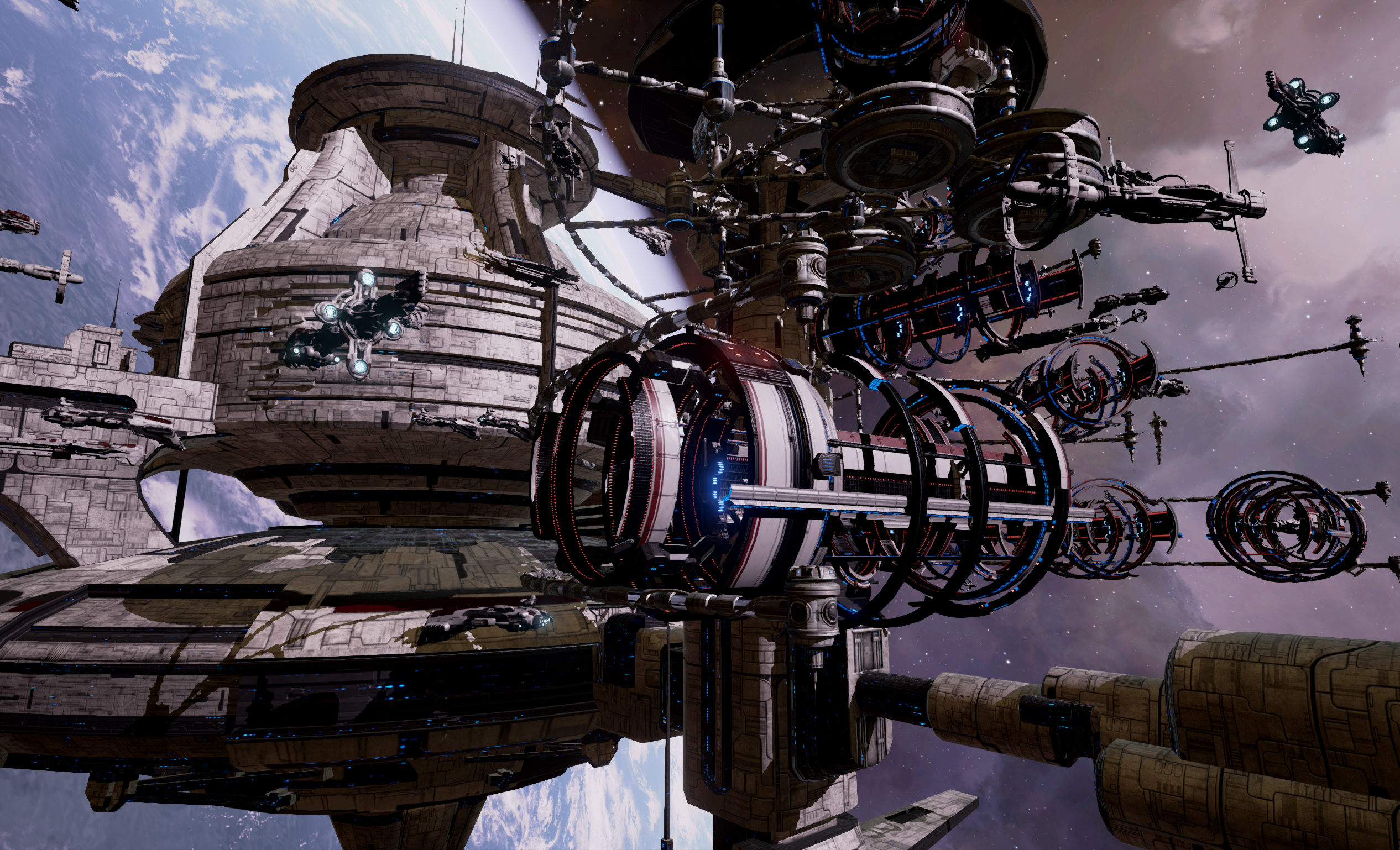 With level design, we’ve always felt that one of our strengths has been with maps where a limited series of smaller structures can be built up together to create something larger and more complex, while still offering the smaller scale structures needed in Valkyrie to create a proper sense of speed. This was evident with our creation of the Shipyard map.

In Fleet, we chose to expand upon a huge star port, adding sections built for size that allow a Valkyrie pilot to navigate, hide and chase in. The action all takes place in close proximity to this immense structure. We’re hoping this will encourage some appreciation for the vast scale of the EVE universe.

As the structure belongs to the Sisters of Eve, a humanitarian aid organization, it’s adorned in their bright red and white colors. The station itself is a busy hub with plenty of traffic flowing throughout, something to look out for when flying!

The addition of Sisters of Eve ships with their ringed structure – the Astero, Primae and Nestor - provides some exciting routes for Valkyrie pilots to fly through and use as cover. We wanted this environment to feel like a bright and lively space, which is in stark contrast to many of our other locations, particularly our other new map in this update, the Outpost. 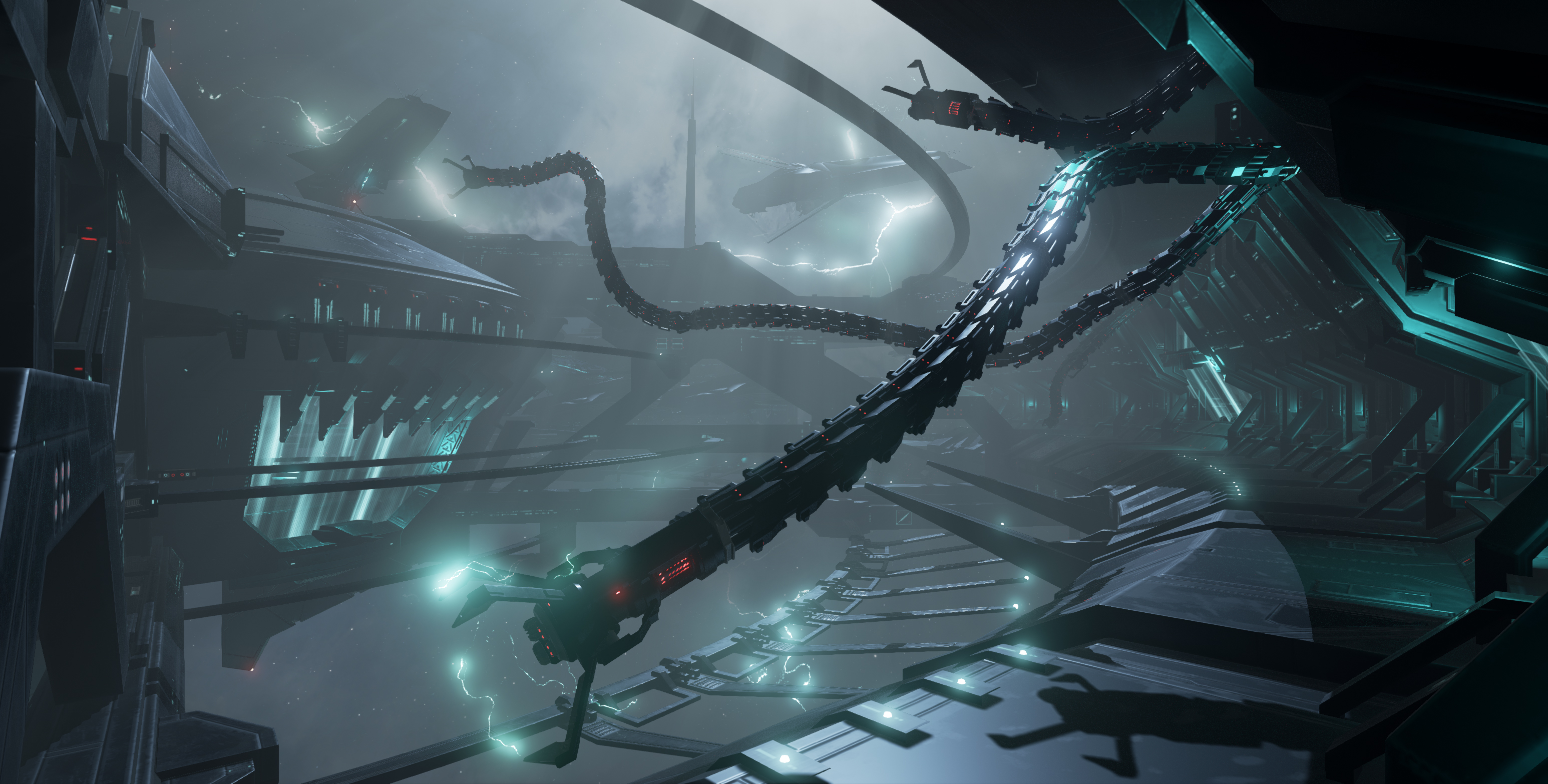 “Crackles of lightning illuminate the oily metal disk that appears to hum with a strong electrical charge. Inside, the Drifters awake from slumber”

In contrast to the lighter color palette and bustling space lanes of the Sisters of Eve Fleet map, we also wanted to provide a glimpse into some of the darker lore of EVE Online.

Since the Drifters first appeared, they’ve been an entity shrouded in mystery. From unusual structures decloaking, to sinister and technologically superior ships taking flight, they’ve become a not just huge point of interest, but also a huge threat. Understandably, we wanted to give Valkyrie pilots the chance to dive in closer and get a taste of that experience.

While the Drifter Outpost may be dark, it most certainly isn’t dead. Battleships are docked inside the structure, lights show the way through a circular series of tunnels travelling around Outpost’s edge, while streaks of lightning illuminate the external surroundings. Pilots will have to be wary of the structure’s abrupt and jagged edges, as well as the possibility of Drifter ships making maneuvers.

With the map largely being composed of one structure, this gave us the opportunity to experiment further with interior sections. The corridors inside Outpost are both narrower and more densely filled than our previous interiors. As a result, they offer a greater challenge to fly through at speed, more opportunities for cover, and equally, collision.

We hope you find these two new maps as exciting and challenging as the others in EVE: Valkyrie - Warzone, with the added spice and atmosphere of the gritty EVE Online… but featuring the distinct Valkyrie flavor.

For more information on EVE: Valkyrie - Warzone, check out this blog.