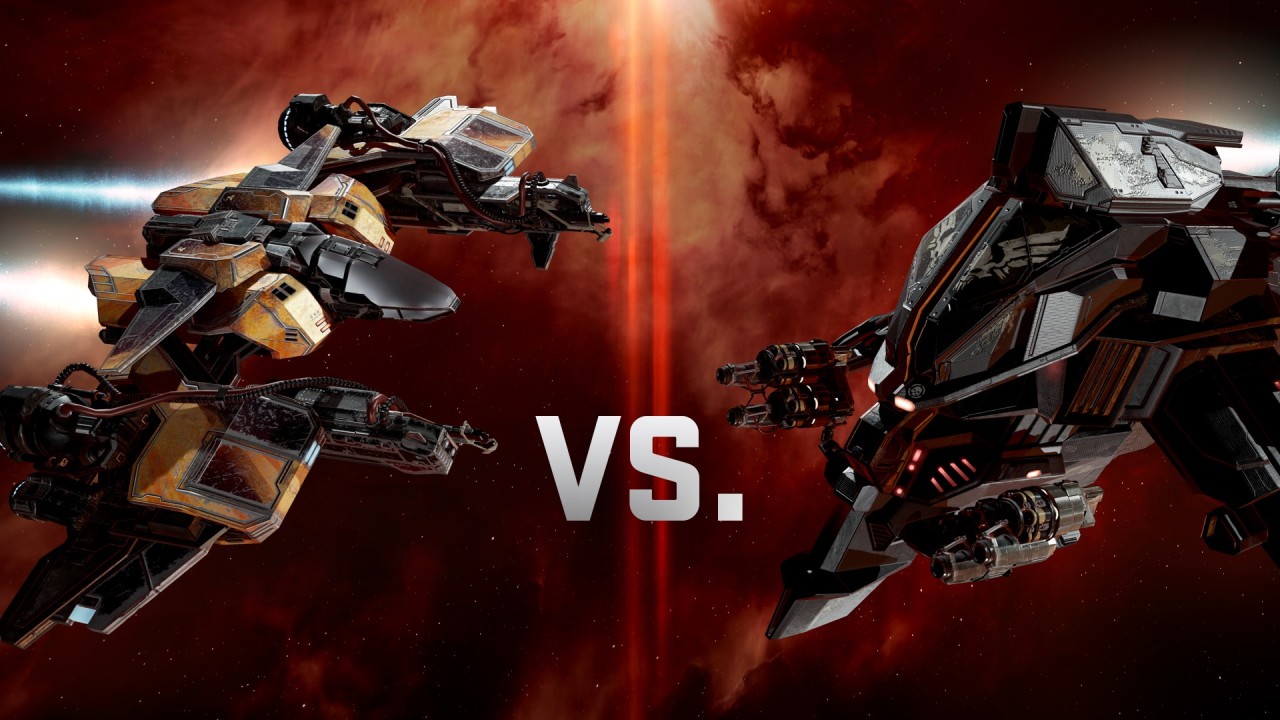 Welcome to the latest in our ongoing series of play guides in which one of New Eden’s foremost Valkyrie pilots imparts his wisdom to our newer recruits. In fact this one kicks off a whole new raft of guides we’ll be bringing to you over the coming weeks and months covering the best way to handle yourself when fighting a specific class of opponent. To get things started our old friend General Stargazer spills the beans on how best to take on the heavies when piloting a fighter. Take it away Mr Stargazer.

There are too many varieties of fighters and heavies to go into the specifics for all the possible individual ship engagements, but what follows is some general advice that will ensure successful encounters with the heavies.

Has the heavy seen you?

There are a couple of different ways to tell if a heavy has seen you. The most obvious one is that the heavy has already started to send shots your way. More disciplined heavies will know ranges so they may not have opened fire, but chances are if you are facing them and they have a clear direct line of sight to you, they’ve probably seen you.

Remember, incoming fire has right of way. Get out of there if you think you’ve been spotted. Nearly all fights where the heavy has started the engagement are going to end badly for a fighter, if the fighter attempts to engage the heavy.

In addition, as a fighter pilot, don’t get tunnel vision. Look around your target. If you engage this heavy, are you likely to be attacked by his wingmen covering him? If so, call for help, or reconsider the engagement, reposition yourself and if anyone chases you can peel them off.

If you have been seen, approaching the heavy directly is going to end badly unless they are a reasonable distance away. Heavies are going to do the most amount of damage to you if they are lined up and you're between both mounted weapons, allowing them to fire from both sides. If they have this approach on you, you're probably going to die if you stick around. Break for cover, evade the shots and get your shield back, then reconsider the engagement.

If you haven’t been seen, now is a good opportunity to consider your approach to the target. Ideally, use cover as best as you can and approach unseen from behind, or below.

Can you hold your nerve?

Taking on a heavy is never a trivial thing. Typically, fighter pilots want to do as much possible damage to the heavy and as such open fire before they are in a good tactical position. Opening fire too early can mean that the heavy has time to switch target and potentially angle to kill you, before you kill him.

If you’ve not been spotted and you’ve positioned yourself behind your target, hold fire until you're close enough that if your target begins to take evasive action you can follow easily and maintain the damage. The worst thing you can do is start firing so far out behind your target that your shots begin to miss and you're not applying the full amount of damage.

What sort of range is close enough? Well, a lot of fighters are equipped with missiles. If you can dumb-fire a full missile salvo directly forward and you think they’ll all hit, you’re at about the right distance.

As a general rule of thumb, dumb-firing missiles is a good opener (you can dumb-fire missiles without a lock by just tapping the missile launch button instead of holding it for a regular lock), followed up by your main guns. Typically when the heavy is on the last drabs of health your missiles will have reloaded and you can fire off another salvo.

How does the escape vector look?

Heavies have a tendency to orbit at quite a distance in a fight pounding targets within an area, then when they start taking fire they consider escape vectors and warp off.

If you’ve lured a heavy into confined area, remember, if the heavy wants to escape, it's going to have only one direction it can go. If you engage in such a way that the heavy is going to have to turn to escape, chances are you're going to be able to kill them before they escape. Or alternatively, they end up warping into the structure in a last minute panicked escape.

Another advantage of being as close as I said before is that if they attempt to microwarpdrive off, you will see the visual of the engines spooling up. If you see this, fighter pilots can actually interrupt the microwarpdrive to prevent them from escaping. You do this with a simple collision. Fly into the ship and knock it off course. This will cause an interruption to the microwarpdrive and means they have to repeat the whole spooling up sequence again. Once again, if they’re attempting to escape at this point, chances are they are already low and you’ll be able to finish them with one or two bumps.

Be warned of the warp feint as well. Experienced heavy pilots will sometimes briefly spool up their microwarpdrives to bait fighter pilots in closer to them when they think that they will win the fight. Sometimes, it's not worth it, if you're both low and you don't think you're going to win, don’t bump them, let them go.

Did you let them escape?

Keep calm, don’t worry, it happens. Learning to bump a heavy at the right time is a difficult thing to learn and will take time.

If they escaped, its not the end of the world, granted your target is now 5-10km away and you have a few things to consider again.

Have you got the capacitor left to boost over and get to the heavy? After a heavy’s warped, their microwarpdrive goes on cooldown, but if you're not going to boost over to it, chances are it's just going to warp again by the time you get there. If you can boost the full distance, great – chances are you're going to finish them before they escape.

In addition, the longer you take to re-engage, the more shields the heavy is going to regenerate for not being in combat.

Lastly, boosting while launching missiles actually increases missile release and travel velocity. If you can launch a salvo of missiles to hit the target while boosting, even better. It should halt the passive shield regeneration long enough for you to get back on target.

Consider your own health too. Chances are the heavy is going to turn back towards you after they finish the warp to check to see if you’re following. Bear this in mind when you re-engage the target. The heavy will have the advantage in the approach and able to apply maximum damage and the maximum range. If you’ve taken a lot of damage too, you may want to reconsider the engagement and wait for a more favourable encounter. You may lose out on the kill, but by keeping yourself alive in the process you're going to end up having a positive effect on the fight.

What else is left to consider?

Again, consider weapons ranges. All ships have different weapons ranges so be aware of this both on your part and that of your enemy.

Weapons exist on both sides of a heavy. They fire from both sides of the ship with alternating fire, so if you can’t get an optimal attack, consider attacking from one side of the ship instead. The ship will be doing around half its usual damage against you. Alternatively, if you need to escape, bank hard so only one turret can hit you. It's going to increase your chances of survival if only one turret is hitting you, or the heavy has to re-align itself.

Deadzones exist on some heavies. These are areas where the turret’s angle prevents them from shooting you. You can almost fly directly into the face of some heavies and be so close to them that neither turret can turn in tightly enough to hit you and the heavy can apply no damage to you.

Use your countering weapons. There are missile-only heavies (the Gorgon and the Goliath) so remember to use your ECM to counter these. There are ships that can only hit with direct line of sight as well so use your environment to evade the damage being dealt.

As you can see there's a lot to consider or think about when engaging a target, but with practice and after a time you’ll do all of these in your head quickly and instinctively and you’ll have no issues at all!

For some insights into the workings of the icy cool new Gateway map check out our hands-on with CCP Roo.