The Yin and Yang of EVE: Valkyrie – Part 2 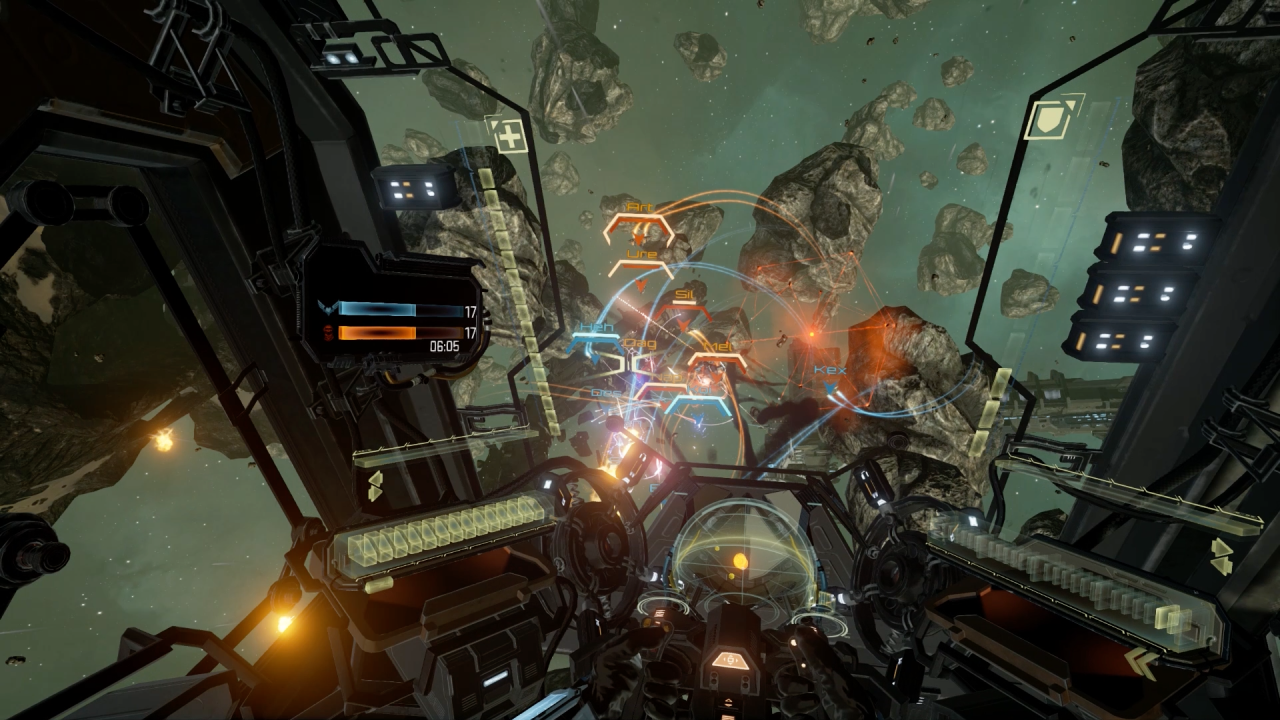 Welcome to the second part of our feature exploring the ways in which the CCP Newcastle team went about creating and honing EVE: Valkyrie into the balanced multi-player, multi-mode dogfighting experience it is today.

In yesterday’s article, we covered how the team went about creating the game in the first place, its use of the enormous library of EVE Online assets available and the new challenges of developing in a VR medium.

Now we come to the crucial task of balancing the gameplay. Although the process is largely invisible to the player, a huge amount of time, effort and experimentation must be devoted to getting the game’s many variables just right.

Any multi-player game must be fair in the way it treats its various types of player and nowhere is this more crucial than in the basic map design. During the creation of EVE: Valkyrie we discovered that the game’s maps should ideally have a mix of open spaces and dense cover, both of which benefit different ship classes. Open spaces are more ideal for heavy ships, not only so that they can exercise their firepower, but also because this allows plenty of room to use their micro warp drive in order to make a quick escape if needed. Heavy ships are comparatively slow and cumbersome, so bigger spaces are easier for these ships to navigate around.

Fighter and support ships rely more on cover for protection. Fighters can utilise cover to escape enemy fire or sneak into a heavy ship’s blind spot to deal some damage. For a support pilot, you can use tighter space such as entrances/exits or corridor-like spaces between asteroids to drop mines and spiderbots, making them harder for enemy ships to avoid.

Clearly, with three markedly different ship classes at the players’ disposal, certain ships are going to have a distinct advantage in certain specific situations. Despite that, an overall balance has to be achieved in order to make the fight fair and also to avoid frustration.

When looking at the performance of each ship the role and purpose of the ship class had to be carefully considered. For example, the fighter is a mid-range ship designed to intercept opponents and harass enemy ships. We use the base ship of the class, for example the Wraith in the fighter class, as the benchmark for this philosophy.

When it comes to weapon loadouts things get even more complex. The challenge is to make sure that each ship is distinct and has its own character and benefits but without any single class or ship having an overwhelming advantage.

For ship performance, one thing to consider is an individual ship’s ‘time to kill’. To clarify, time to kill is the time it takes a ship to kill another ship class within the game. Another aspect taken into account is the ‘time alive’. The time alive is how long a ship should stay alive against the other ship classes in the game.

Following this, the team looks at what should happen for each ship in their perfect scenario. Taking the Wraith as an example, one of the scenarios looked at is if the wraith is 100% accurate with its primary and secondary weapons, what is its time to kill against the other ship classes in the game?

Then a ship’s other attributes such as damage, rate of fire, projectile speed and many more can be used to tune the ships further.

Another area that must be carefully examined is the process of training and matching. If a new Valkyrie player were to be thrown straight into the mix with far superior flyers it would be a pretty soul-destroying experience. There are several systems in place to help players ease into Valkyrie. The first system is training. Valkyrie offers the player basic flight training as well as training for each of the base ship classes within the game. Players can also use scout mode, allowing them to fly around Valkyrie’s many levels without the pressure of combat.

When players are ready to step into multiplayer, they are first placed in the proving grounds. This eases players into the multiplayer experience by matching them against AI. New pilots are placed on the same team in a co-op player versus AI experience. Players are kept in the proving grounds until they reach rank five. As they progress through to rank five they unlock the first ship in each class – the Spectre (heavy) at rank three and the Banshee (support) at rank five. This allows players to experiment with the different base classes to see which they prefer, but with the option to stay in the player vs AI environment.

Upon reaching rank five, players can continue the co-op experience against the AI. However, players also unlock the opportunity to enter player vs player combat. This is where they will be matched against human pilots of a similar skill level. By implementing these systems it’s possible to allow newcomers to gradually grapple with the controls, weapons systems, environments and, crucially, to build confidence before playing alongside other real-world players without ever feeling overwhelmed.

To conclude, it’s worth noting that this process of balancing the gameplay is never finished. It’s ongoing. The more maps and ship classes introduced to EVE: Valkyrie the more the team has to rigorously test and retest the balance, adjusting things where necessary while also taking onboard feedback from the community.

In closing, we’d like to say thank you to the team at CCP Newcastle who provided us with their time and expertise in putting together this journey through the game’s creation. They are: Andy Willans/CCP Roo – Lead Game Designer, Emily Knox/CCP Starbug – Level Designer, Andrew Robinson/CCP TerrorShark – Narrative Designer and Erich Cooper/CCP Groot – Game Designer.